I recently had an issue during an install of a Windows Media Center Extender. The install may have failed do to the install being interrupted by a power outage and it seems like some files may have been corrupted on the MC PC.

I was receiving the error:

I found a post that cleared up the problem by following the steps below:

Go to C:\windows\system32\grouppolicy and delete the contents of the folder (including the directories).
You will need to untick Hide Protected Operating System Files and select Show Hidden Files and Folders before you browse.

Hope this helps, and use the advice at your own risk, but it just worked for me. I copied the files elsewhere just in case before I deleted them, but didn’t need to do anything with them, as they were regenerated when I added the extender.

I’ve been in the Windows Media Center game from the very beginning, aside from a brief run-around with the MythTV project.  Over the years I have struggled to come up with a solution that got me all of the way to a wife acceptance factor of, well, acceptable.  This has lead me to have a really expensive Media Center setup in about 5 complete hardware/software revisions over the years.

With the very best I still, in some measure of defeat, have maintained a set top cable DVR.  Sad, really sad.

Early last year, I made the leap and got on the pre-order list for the Ceton InfiniTV 4 – a rumored, mythical, 4 tuner cable card solution with promise.  I threw my $400 on the table and began the wait.  At the most, I could expect an over promised, under delivered piece of junk that I could sell on eBay for 25% of it’s purchase price like so many other failed tech solutions, right? 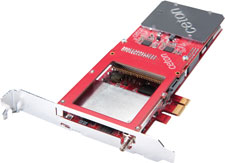 When it finally arrived, 7 months later, the hype in the forums were at a real frenzy, with people getting $800 for the card.  People were saying that this thing just worked.  I had such high hopes.  A tear came to my eye imagining my wife looking at me with pride, finally achieving my Media Center dream.  All those grand undelivered promises forgiven.  A restored sense of tech God balance, a platform for future gadget endeavors to spring forth, media related and otherwise.

Ready for defeat, I installed the card, and prepared to battle Comcast, something I had done before having been on the ATI Digital Cable Tuner bandwagon.  After hours and hours of phone support where I begged them pitifully, like a scene from Midnight Express, to understand that they did not need to come to my house (I already had the CableCard) I convinced the right person to touch the right button.  And then I finished the Windows Media Center 7 setup.

From that moment, until now, the experience really has been a wonder – in light of all of my past failures.  The Ceton card works like a champ.  I have never lost a recorded program, seen it stutter, crash, stall, hang, or otherwise make my wife laugh at me.  I have finally found a solution that gives me the power to do what I have promised several times in the past: take the DVR back to Comcast.  It’s been 3 months.  The InfiniTV has never failed.  Never. I still have that damn DVR, but I swear, after a bit more testing I’m really going to take it back.